Cloud Foundry
From Zero To Hero

01 What is Cloud Foundry?

This content is copyright of CloudCredo. © CloudCredo 2015. All rights reserved.

Why are we here?

If you really want to learn,
ask questions

Questions cannot be stupid. Answers can.

We will deliver a feature
with every topic

Why is the content being delivered by a team of people?

If you need an extra challenge

What is Cloud Foundry?

Find out more at docs.cloudfoundry.org

Open-source with an Apache license, hosted on GitHub.

Developers use the cf command line utility to interact with a CF deployment. The cf cli is pre-built for Windows, Mac and Linux.

CF supports any language or framework through buildpacks. More on that subject later.

What is Platform as a Service?

Heroku created patterns based on their experiences called “12 Factors” that have been heavily influencial. Also drove “buildpack” model

Why Platform as a Service?

Find what your customers actually want by showing them. Iterate constantly by learning what is actually important.

Do not wait for IT to provision servers.

Let developers choose the language and services that they believe are best for the job.

How many types of CF?

Great learning opportunity through DIY. Takes a long time to master. BOSH has a steep learning curve. CF on bosh-lite requires 10GB of FREE RAM. Companies such as Cloud Credo specialise in custom CF deployments, optimisations & customisations. If you find yourself enjoying this type of work, we want to hear from you.

The Pivotal Cloud Foundry distribution is also known as Pivotal Elastic Runtime. Pivotal has been involved with CF the longest, they have the most experience. Pivotal is contributing the most to the open source CF. Pivotal has built & open-sourced a number of stateful services such as MySQL, Cassandra, Redis, RabbitMQ and others. They all work great in combination with CF.

CloudCredo Platform allows you to deploy a CF and a number of other services such as Kubernetes from a simple UI. You only pay the standard infrastructure costs, it’s completely free to use.

IBM Bluemix is CF and a limited number of services on IBM hardware. Banks love this.

Canopy Cloud, a.k.a. The Atos Cloud.

Anynines is based in Saarbrücken and provides decent plans for all popular stateful services such as MongoDB, Redis, ElasticSearch & MySQL.

Swisscom Developer Portal, launched on the 2nd of October 2015, it’s a 100% Swiss cloud solution according to the official website.

IBM Bluemix runs on Softlayer in 2 regions: Texas & London. Many IBM-only services such as Watson, Cloudant, Internet of Things are already integrated and come with generous free plans. You also get access to IBM Containers and Virtual Machines from the same dashboard.

Pivotal Web Services have been around the longest, the service runs on AWS. 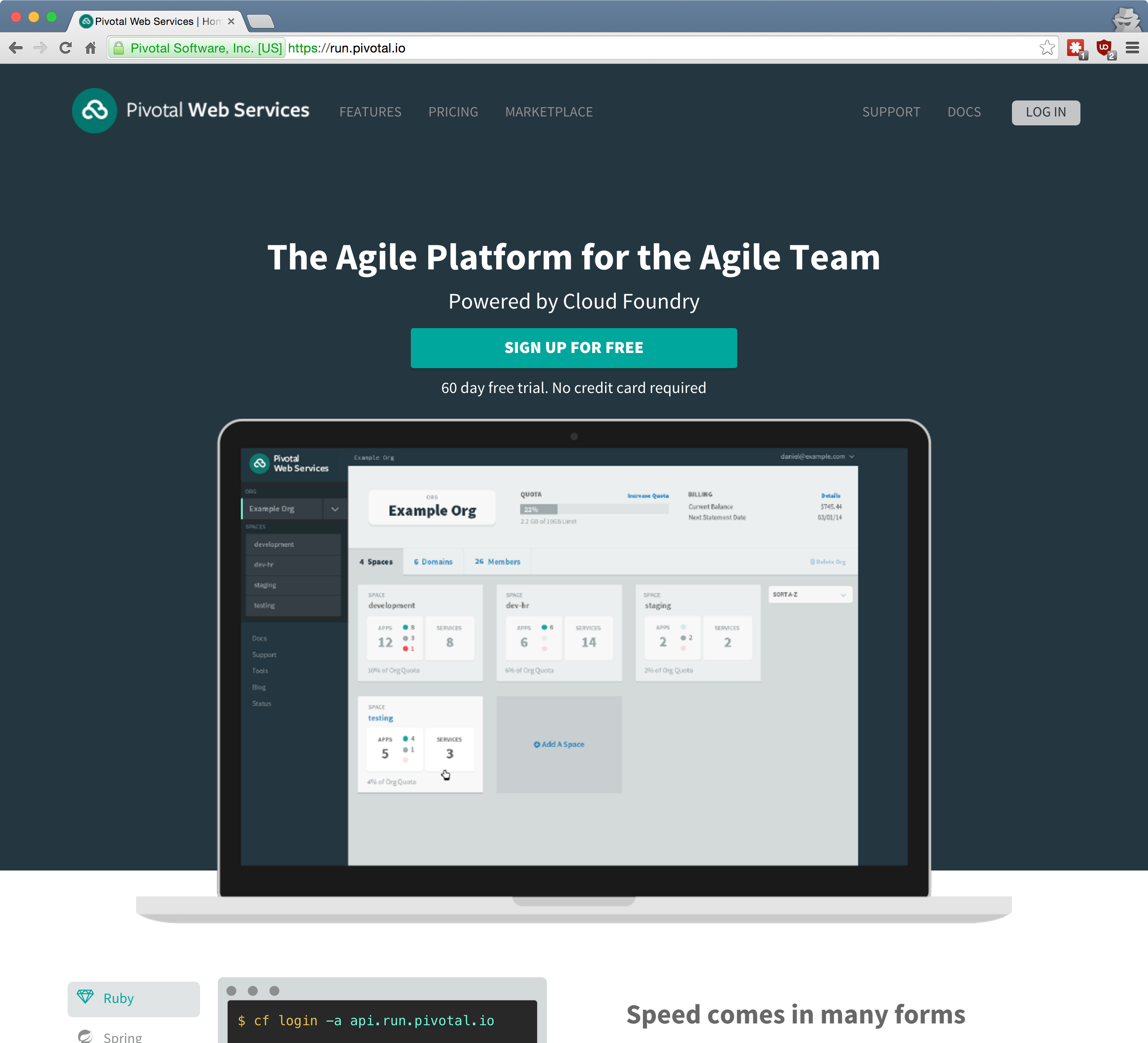 Questions cannot be stupid. Answers can.

This content is copyright of CloudCredo. © CloudCredo 2015. All rights reserved.